The unique thing about this Special Offering is that every dollar offered is going into ministries or projects outside of our organization.  In other words, we are not asking for support for our operating budget.  We are raising funds that will go directly into ministries and projects that will fulfill the Great Commission of making disciples of all nations locally and globally.  ​

The “Bless the Nations” Special Offering is a call to sacrificial giving with a goal of $10,000 for the following ministries:
You can give by Online Giving, Donate by Mail, or Pay-Bill Service. For detailed information, you may refer to the Frequently Asked Questions section at the bottom of this page.
Kingdom Network Global Partners
Goal: $10,000
Throughout the years, our ministry has gotten the opportunities to know and partner with several amazing ministries that are doing very meaningful and strategic work in some of the most challenging parts of the world.   Among them, we have chosen five ministries that we have very close personal knowledge and relationship with their leaders who are very respectable and faithful men and women of God.  Therefore, with full confidence, we are inviting you to partner with us in our support to these ministries in some of the most challenging, and even dangerous, parts of the world.
Beijing House of Prayer (China)
Winning the city of Beijing through strategic prayers and making disciples for Jesus
​
​​Beijing is the national and political heart of China with a population of 21.5 million. There are more than 80 million Christians now in China and there is a need for spiritual revival in prayer and missions. Different intercessors received the calling of establishing a prayer house in Beijing in 2015, and after two years of prayer and preparation, the Beijing House of Prayer was finally started in the summer of 2017. Pastor Rainbow was commissioned by Sunrise House of Prayer (LA) and sent to Beijing to assist the local intercessors in the startup process.

With the establishment of Beijing House of Prayer, the local intercessory team seeks to win the city for Jesus and bring transformation in it through strategic and spiritual warfare prayers. They are also eager to make disciples for Jesus and send them out to influence the city. We’re excited to be a part of the newly established Beijing House of Prayer by providing financial support and sending teams to train the local Christians.
Roads of Success (Arabs & Worldwide)
Life-changing Media, serving Middle-Eastern women and persecuted minorities, and advocating for equal rights and freedoms with Dr. Yvette Isaac & Jacqueline Isaac

Recently, Christians and minorities in the Middle East have been going through severe ethnic and religious persecutions.  Roads of Success's (ROS) team of experts and advocates have testified in parliaments across the globe, such as the UK and USA, and in the UN making the case for Christians, Yazidis and other minorities and women.   They have influenced legislation and policies by meeting with government officials, holding workshops, conferences and hearings.  For example, on April 28, 2016, ROS VP, Jacqueline Isaac, testified at the United Nations calling for the Security Council to pass a resolution authorizing the prosecution of ISIS as the perpetrators of genocide, "the crime of all crimes."

In addition, ROS produces and distributes Christian television programs that are boardcasted to the whole Arab world every week.  ROS also sends short term relief missions to refugees in Northern Iraq.  We feel honored for the divine opportunity to participate in the life saving and transforming work of ROS.   Therefore, we are very excited to partner with Dr. Yvette Isaac and ROS through this offering.

Witness as Ministry (Lebanon & the Middle East)
Provide much needed relief for refugees and victims of war with Dr. Jean Bouchebel

​​As winter approaches, many Syrian and Iraqi refugees who were left homeless by the civil war are anxious. The Office of the United Nations High Commissioner for Refugees (UNHCR) indicates that there are a total of about 13.5 million refugees who have no food or shelter and half of them are children.

Because of the security threat posted by ISIS, many humanitarian organizations around the world do not know how to respond to this refugee crisis. However, God has been using Witness as Ministry (WAM) to provide food and medical need to over 112,000 refugees in the past year. In 2015 alone, WAM delivered 25 large shipping containers with food, medical, shelter, clothing and emergency supplies to the refugees in Lebanon and Jordan. They are providing education and community support to refugee children. Most importantly, WAM is actively participating in sharing the gospel with refugees by partnering with local churches in Lebanon and Jordan.

Dr. Bouchebel shared with us that “many Muslim refugees are now very interested in knowing more about Jesus Christ and they are joining the local churches for the first time in their lives because they received love and generous helps from Christians in the midst of crisis.”  At the same time, he also said “The demand is huge and the resources are so limited!  We need more people and churches from other countries to partner with us.”

​Since 2014 we have been supporting WAM so that together we can make a difference in the lives and families of these refugees!

​From the Bible, we know that Israel is God’s firstborn and our Father longs to see all children of Abraham return to him and be saved. We are honored to have become friends with our global partner in Israel since 2014.  He has been in Israel as a tent-making missionary for fourteen years. In the past seven years, our brother has planted over 50 house churches among both the Jewish people and Muslim background Palestinians in the land of Israel.

​The Bible states that “for those who bless Abraham and his descendants, God promises to bless them in return.” Therefore, through this offering we have the opportunity to bless and partner with an effective missionary work in Israel through this church planting ministry. We are eager to support him so that the Jewish people and Arabs in Israel can become members in the Kingdom of God.

Cyclones, floods, and continuous ethnic conflict have made Myanmar one of the poorest countries in the Asia. In 2001, Jay Judson a native Tennessean began to travel in Asia where he learned about the Rohingya who the United Nations calls one of the most oppressed places in the world. Partnering with the Major who spoke up for the Rohingya even though he himself is an ethnic Rakhine, the team began to provide relief aids to the community through a multifaceted approach.
​
Global Catalytic Network (GCN) was officially registered in January 2016 with members based in 5 countries and 43 years combined experience in providing relief and catalyzing community development projects in Asia and the Middle East. Not only did the ministry work to address social, educational, and physical needs within the community, GCN also started explosive disciple-making movements with stunning results in Myanmar which is one of the most devout Buddhist countries in the world. Local key leaders have been empowered to plant house churches among the least reached people groups in the country. Through financially supporting the ministry, we are able to provide relief and improvement to people’s livelihood and at the same time advancing the Kingdom through supporting the disciple-making movements in Myanmar. 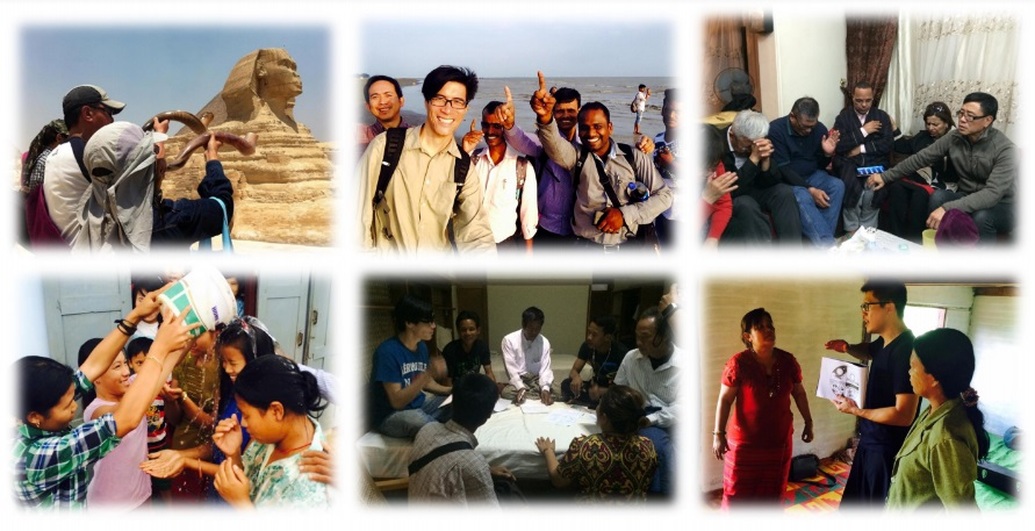 We are grateful that God has given our ministry a Kingdom vision and allows us to participate in His work all over the world.  We see that God is leading our entire organization to fully engage in carrying out the Great Commission – “to make disciples of all nations”. If we receive more than $12,500, extra funds will be allocated to “Sunrise General Mission Fund” so that we can send more teams to different mission fields to start prayer movements and disciple-making movements!
give now
Frequently Asked Questions
Why a Special Offering?
As part of God’s plan to grow the faith of the people in His church, He calls us to sacrificial giving from time to time. This Special Offering is an opportunity for us to grow in our faith and to prepare us for what God wants to do through our congregation in 2018. This offering is not because we are behind on budget, but rather is to position us to make a greater impact in our city and around the world in 2018.

What’s the Difference Between the Regular Offering and this Special Offering?
The regular Sunrise offering is the proportional amount (the full tithe of 10%) that we set apart on a systematic basis and give throughout the year. From time to time there are opportunities to give in a sacrificial way. This Special Offering is one of those sacrificial occasions that stretch us to grow in our faith. The special offering should be over and above what you regularly give.

How Much Should I Give?
Since the goal is $12,500, this Special Offering will involve everyone. Please prayerfully consider a sacrificial gift that will stretch your faith. The precise amount you give is between you and God. Many in our congregation can give a $1,000, $2,000 or even a $5,000 gift. Others will be able to give between $50 and $500. The issue is not equal giving, but equal sacrifice. What amount can you give that will stretch your faith?

Why is the Goal So Large?
Since the beginning of Sunrise in 2000, we have been a ministry that has dared to dream dreams for God. The ministries supported by this offering are BIG: blessing the LA community, touching over 5,000 lives and supporting missions that assist the poor and needy. Big dreams require big faith and big funding. The accomplishment of these big dreams will be determined by your gifts to this Special Offering.

How Should I Give?
This Special Offering will be received through January 31, 2018. You can give by:
We really appreciate your support to the “Bless the Nations” Special Offering through any of the donation methods mentioned above. Please write down “Special Offering” on the memo line.

When Should I Give?
You can give to this offering starting today until January 31, 2018. Please write “Special Offering” in the memo area on the offering envelopes or on the PayPal site. Remember, consistent gifts over time add up – a person giving $50 per week over a ten-week period will give $500 to this Special Offering.

Are My Gifts Tax-Deductible?
All gifts to The Sunrise, whether via the regular offering or this Special Offering, are completely tax-deductible in the United States. Your gift will be deductible in the tax year given (i.e., gifts given in 2016 will be deductible on your 2016 taxes). Please be sure to include your name and address when you give so that a receipt can be sent to you for your tax preparations. You are not required to utilize a tax deduction for your gift, but it is available for all gifts.

How Did We Arrive at a $12,500 Goal?
The $12,500 goal was prayerfully set by the Sunrise Leaders. It is a God-sized goal that can only be accomplished through participation and sacrificial giving by our brothers and sisters locally and globally. Since we are expecting God to bless this Special Offering, it has been determined that any amount over and above our goal will be used in the area of world missions.

How Will I Know if We Reach Our Goal?
​Please pray for God’s guidance as we all give sacrificially. You will be updated on our giving progress through our website and Facebook page. Reaching this goal will be a celebration of what we can do together as we stretch our faith under God’s leadership.
Have additional questions?
​Please contact us at admin@sunrisela.org, or call 626-281-3406. ​